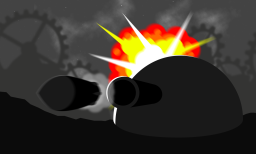 YesSir is a single & multiplayer turn-based tank battle game aiming at the defense of your country against fearsome invaders.

Leading your tank, you need accuracy, strategy and using surrounding environment to blow up your enemies before being killed. Unlock a ton of weapons from small missiles to huge nukes.

Features:
- Campaign mode and Local multiplayer ( up to 4 players)
- 13 weapons to unlock (nukes, laser, shield, spy and napalm)
- Complete over 138 missions through 38 cities
- Level up and become General of the Armies
- Destructible environment
- Randomly meteorite showers
- Damages from both weapon fire and from falling
- Wind affects ballistic shots.