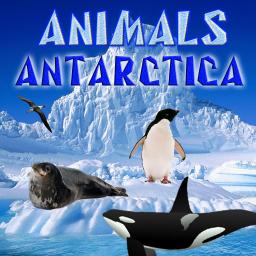 Our application will introduce you to the inhabitants of the Antarctica. You immerse yourself in the wonderful world of the mysterious sounds of Antarctic animals. We will show you amazing photos of wild Antarctica.

Few terrestrial vertebrates live in Antarctica. Invertebrate life includes microscopic mites like the Alaskozetes antarcticus, lice, nematodes, tardigrades, rotifers, krill and springtails. The flightless midge Belgica antarctica, up to 6 millimetres (0.2 in) in size, is the largest purely terrestrial animal in Antarctica. The snow petrel is one of only three birds that breed exclusively in Antarctica.

Some species of marine animals exist and rely, directly or indirectly, on the phytoplankton. Antarctic sea life includes penguins, blue whales, orcas, colossal squids and fur seals. The emperor penguin is the only penguin that breeds during the winter in Antarctica, while the Adélie penguin breeds farther south than any other penguin. The rockhopper penguin has distinctive feathers around the eyes, giving the appearance of elaborate eyelashes. King penguins, chinstrap penguins, and gentoo penguins also breed in the Antarctic.

The Antarctic fur seal was very heavily hunted in the 18th and 19th centuries for its pelt by sealers from the United States and the United Kingdom. The Weddell seal, a "true seal", is named after Sir James Weddell, commander of British sealing expeditions in the Weddell Sea. Antarctic krill, which congregate in large schools, is the keystone species of the ecosystem of the Southern Ocean, and is an important food organism for whales, seals, leopard seals, fur seals, squid, icefish, penguins, albatrosses and many other birds.

A census of sea life carried out during the International Polar Year and which involved some 500 researchers was released in 2010. The research is part of the global Census of Marine Life (CoML) and has disclosed some remarkable findings. More than 235 marine organisms live in both polar regions, having bridged the gap of 12,000 km (7,456 mi). Large animals such as some cetaceans and birds make the round trip annually. More surprising are small forms of life such as mudworms, sea cucumbers and free-swimming snails found in both polar oceans. Various factors may aid in their distribution – fairly uniform temperatures of the deep ocean at the poles and the equator which differ by no more than 5 °C, and the major current systems or marine conveyor belt which transport eggs and larval stages.