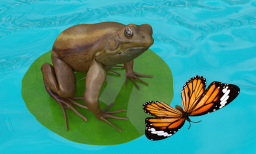 The rules of the pond are simple: Eat, but don't get eaten. Eat all the bugs as fast as possible to earn stars and unlock levels. Evade predators such as the turtle, snake, raven and perch. Play with up to four players to see who will rule the pond! Include computer frogs in the game for more competition.

Control your frog with simple swipe gestures or use the accelerometer to jump and lick your way to victory using the Siri Remote. Use third-party game controllers or the iOS version of the game for additional players.

With an in-app purchase, unlock all features including the toad and the poison dart frog. Watch ads in the game to earn perks that can be used in the game to game the advantage.

Features:
• Gesture or Accelerometer controls for Siri Remote
• Eat all kinds of bugs. Dragonflies, butterflies, bees, fireflies, spiders and good old fashioned flies.
• Choose from three types of amphibians, the Frog, the Toad* or the Poison Dart Frog*.
• Evade pond predators like the snake, turtle, fish and birds. Also watch out for lightning!
• Careful not to lick any poisonous opponents!
• Discover various perks such as the umbrella, bubble gum, cactus hat, gas mask and poison.
• Play Campaign mode to compete against the clock to earn stars and unlock levels.
• Play Versus mode to compete against computer frogs or other players.
• Play timed games, most bugs eaten or accuracy games.
• Play with teams to compete together.

Frog’s Life is incredibly fun as a single player game, competing against the clock, and becomes even more exciting when competing against other frogs. Computer frogs can be adjusted from avid bug eaters to ridiculously skilled bug assassins.

Nothing compares to the thrill of multiple players clamoring for the same swarm of insects.

Dive into the pond and start eating.