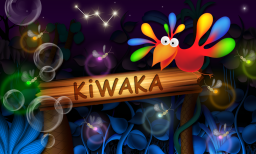 Kiwaka is a game that explores the concept of tangential learning. Designed to educate and entertain, Kiwaka will let you learn Astronomy, Night Sky Observation and Greek Mythology while engaged in a game. Game progress is rewarded with educational content.

Do you know the story of Cassiopeia, the vain Queen of Ethiopia? Or the myth of Perseus and how he killed Medusa who turned all who gazed upon her to stone? Have you heard of Orion, the great hunter, and his enemy, the giant Scorpion?… Kiwaka will unveil the stories behind each constellation as you conquer them.

Kiwaka was developed in collaboration with the European Space Agency (ESA), the European Southern Observatory (ESO) and other leading scientific organizations to display over 120 stunning space images, as well as external links to explore the cosmos further. Kiwaka also includes several videos to help you locate important stars and constellations in the sky.

The adventure begins in Kiwaka, a small place in the African jungle (it actually exists!) where the strangest creatures live. They want to discover the night sky and your goal is to catch fireflies to help them - each firefly will light one of the stars in the sky. As the fireflies bring light to the constellations they reveal their hidden mysteries and ancient myths.

Designed for children and enjoyed by all ages, Kiwaka is a magical learning adventure. Astronomy has never been so engaging!

Also enjoy our Book app – Kiwaka Story – to know the story behind the characters in the game and follow their quest to light the stars in the sky and unveil the ancient mysteries of the constellations (narrated by Diogo Morgado - in English and Portuguese editions – leading actor in the History Channel Series “The Bible” and Motion Picture “Son of God”).

Kiwaka is an educational game. It does not contain in-app purchases nor third party advertisement. The same single purchase will allow to play on iPhone, iPad or Apple TV.

“Fireflies carry the light from the stars” – ancient legend.