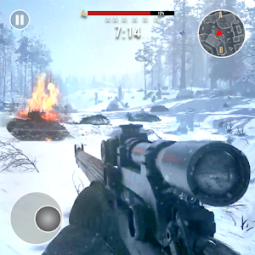 Prepare your sniper rifles and answer to the duty call in battleground of WW2 war games. #1 fps shooting game with great 3D offline army games graphics. Are you a fan of Cold War FPS with HD quality in war games and like to play free sniper games then you are in the right place!

Install and start playing the most iconic Cold War Games maps any time anywhere offline! This is a fun free online Special Ops shooting game with exciting new world war 2 games battle modes. More fps battleground action as you do your duty after answering to the call of sniper games.

New sniper games mode- unlock and enjoy new modes, new weapons like sniper rifles, shotguns and more like from historical cold war or like from many World War 2 games. This another addition in the list of top free army games as well as shooting games category with new survival and action-packed modes.

Special Ops are very skilled and secret members of army in this free war game that you can play anywhere on mobile. Intense missions and operations with code name Black is waiting in this incredible action game on the battlefields where enemy soldiers and you will engage in battle.

Choose weapons from shooting games like cold war and WW2 using best fps guns like in other world war 2 games or even in sniper games. With historical theme of war games. In challenging mission, you must take the role of a world war 2 sniper soldier in battlefield and use strategy to collect weapons in battle to survive in this free offline fps game.