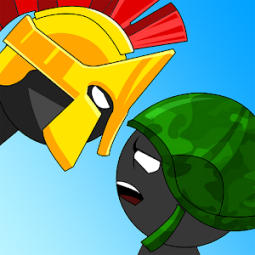 Age of Stickman Battle of Empires

Age of Stickman Battle of Empires is a new version of a stickman game that includes the best of real-time strategies. Fight in different eras together with stickman heroes. Start from the primitive times, the times of the Vikings and the knights, and work your way up to the modern period and even the future. Build your great empire and fight all civilizations. The strongest will win!

Capture as many lands and resources as possible to hire a powerful army. At your disposal: workers, infantry, stickman archers, artillery, cavalry, tanks, helicopters and even stick robots. Train units and pump them as you move from one military era to another. Become a hero of great civilizations!

💪 Ready for the legendary stickman battle?

An exciting stickman battle is waiting for you. Siege new lands in different eras of the Middle Ages, Crusaders, Musketeers and ending with Cyberpunk and the Future. Immerse yourself in the legacy of ancient and modern battles. Defend your base from the raid of enemy stickmen troops. Lay siege to the enemy tower and destroy it to win. Apply unique tactics for each battle and location. More than 50 unique tasks are waiting for you!

⭐ Age of Stickman Battle of Empires is free to play!