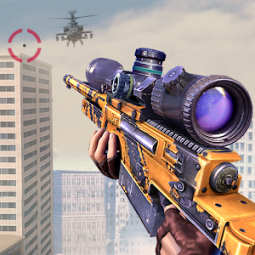 The story mode action game consists of awesome sniper shooting missions where you have to play the role of a 3d sniper shooter. Play the various gun shooting game levels of this sniper game and beat the evil forces. Complete various fps sniper shooting tasks and unlock new map locations and an awesome range of snipping guns in the latest offline shooting games 2020. Such a great storyline for gun games for free is a must for all sniper shooter games lovers, to check out. The wide range of offline sniper games missions makes the player keep playing the fps shooter game.

Are you ready for this Amazing and thrilling sniper games? If yes then download now this Sniper Shooting Games. Use special stealth war striking tactics to advance in this free game. In New sniper shooting game use aim telescope to kill terrorists who drive to escape in the city. Destroy the enemy cars take sniper shots. In this sniper game you will find a variety of guns and many other shooting products in the store. If you love to play shooting games in the category of gun games then these action-packed games are for you.