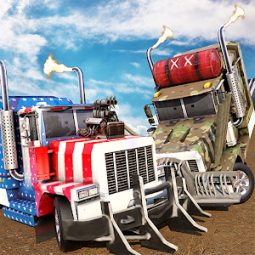 Have you ever heard of euro truck vs monster truck demolition derby car stunts. If not, then the time has come to introduce to it. This euro truck vs monster jam 3d game is a real concept of car vs monster truck fight and win derby cup in derby gameplay getting mad at each other in stunts performing in the offroad arena. This collision and fighting game will lead you to a new way of getting thrill with free monsters in monster jam and fight with hero monster trucks with hero euro trucks. This freestyle game is a demolition game which is also a racing derby and has multiple arenas to fight on and get a chance to win derby cup. 4x4 trucks in this will be favorite for kids and cargo driving fell will be there because of euro truck and cargo truck sim in offroad cargo driving with 4x4 euro trucks and 4x4 monster trucks. Mad trucks in derby racing game will be of xtreme monster drive on extreme level. Hero monsters in derby crash will help you in bumper car crashing.
In this euro tuck vs monster truck game we will be fighting against lucas monster truck and grave digger monster truck. This is an offline derby 3D game with full of extreme adventure. Derby car racing and euro truck fighting in the battle arenas will be amazing as it is new to this world and has never been done before. This demolition game will give you real fell to win derby cup with derby car racing in the battle of euro truck vs monster truck in this demolition derby car stunts 2020. This monster stunt and euro truck stunts has many options of performing stunts in arena with monster stunts and euro stunt. The dashing and fighting with collision with monster jam with euro cargo sim and offroad 4x4 trucks will be really amazing as of 2020 it has never been done before, The demolisher you will be having is euro truck and your aim will be to demolish monster trucks in monster jam. The collision in this demolition game with free monster cars will be exciting in derby gameplay. Monster stunts with freestyle drive with 4x4 offroad cargo riving with the demolisher and monster truck jam with free monster cars in this euro truck vs monster truck stunts.
The derby gameplay in this mad euro truck and mad monster truck destruction will be extreme monster 4x4 drive in 2020 and robot fighting in this mud fest in new arenas as trucks will act as robot and engage in robot fighting mode will be activated in this mud fest and truck games arena. This offline derby has a great chance to get you win offline derby game and perform extreme stunts ion this world with offroad 4x4 truck in cargo truck sim and offroad cargo driving. Mad 2020 derby stunts will be a real game [!play!/]