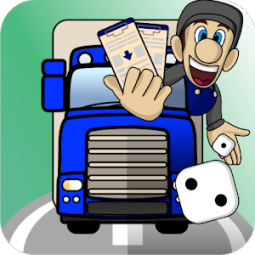 Auf Achse - The Logistics Board Game

Auf Achse (On the Road), the German board game about trucks, freight and money.

Discover the successful board game "Auf Achse", game of the year 1987 by Wolfgang Kramer, on your smartphone or tablet. Beat your fellow players as in the original German board game in the transport business between Flensburg and Verona. The competition for the best transport routes requires sophisticated route planning, tense price wars and optimal utilization of truck freight capacities. Again and again, new events occur that can make it difficult or easier for the trucks to travel the routes. Foresighted planning and - as so often in life - a portion of luck bring the deciding advantage for the victory in the board game.

Play the original rulebook of the year 2007 and make the most money through optimal route planning. Prove yourself in competition up to six players, either locally against computer opponents or online against other players from the Google Play Games network.

- Adaptation of the board game "Auf Achse" in the original 2007 edition rulebook.
- Collect orders and complete them to earn money
- Gather new orders and plan the best routes
- Buy trailers to increase capacity
- Win at the end as the player who has the most money
- Three different difficulty levels for computer opponents
- Real-time multiplayer (online)
- play against friends
- or in quick play against up to two unknown opponents
- Pass and Play Multiplayer (Offline)
- Games with several people on one device
- Interactive tutorial
- Save local games and continue them at any time
- Two leaderboards (most money earned, best score)