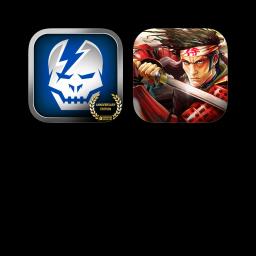 The year is 2350, and corrupt intergalactic corporations are the rule of law, hiring bounty hunters and mercs to do their bidding. The best of the best are known as SHADOWGUNS.

Featured in Benchmark Games and Gorgeous Games by Apple !!!

Samurai: Way of the Warrior was featured in Best Games of 2009 by Apple – Samurai II is a true successor, aided by over a year of focused development. Overall production values and vicious action put Samurai II on par with console 3D brawlers. Screenshots don’t do Samurai II justice – the fluid action has to be seen running at 60 frames per second on the Retina display or popping off the iPad screen.

*Support iCloud to transfer save between various devices