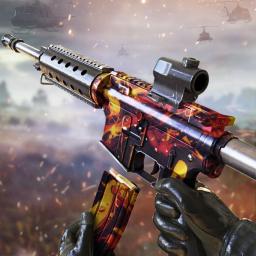 Start this epic first-person shooter “Frontline Army Ghosts Mission" game. Play as army commando to win this special mountain strike operation. Terrorist groups are expanding their territory over the mountain and this thing needs to be tackled with no time. Go on duty to eliminate terrorists and their territories. Enjoy the 3d sniper shooting missions, aim and shot your target from distance.

Frontline Army Ghosts Mission is the war between an army commando and terrorist armed forces. Stand up! built your own arena rules, prepare your armed weapons to win this glorious battlefield mission.

Features-:
-The best counter-terrorist strike shooting game for free.
-Play and win the fight between you and terrorist armed forces.
-Amazing 3d graphics, environment and sound effects.
-Use your best strategy to fight for Global war and peace.

Frontline Army Ghost Mission was featured in iOS on 1 placements in France on 19 Aoû 2018.