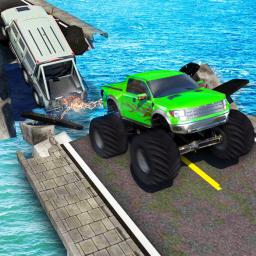 Ready for action bursting tug of war challenge & feel the excitement of cars derby in this death race. Play Tug of War: Tractor Pull Drive and experience drag racing like never seen before. Tug of war directly puts two vehicles against each other in a drive of strength. Each car pull on opposite ends of the chain, with the goal to bring the chain a certain distance in one direction against the force of rival car. Perfect shift is the key to win this xtreme pull match.

Experience death race at multiple exotic locations including Deadly Canyons, Bay bridge and City skyscraper. There is no rule! The first car to drag other challenger down wins the pull match. Aside from the raw muscle power needed for tug of war cars derby, it is also a technical pull race. Take control of car and spin tires to perform a burnout. This heats the tires and lays rubber down at the beginning of each match.

Enjoy the amazing gameplay and give your feedback to help us improve this game in future releases.

Tug of War: Tractor Pull Drive was featured in iOS on 2 placements in France on 28 Mar 2018.