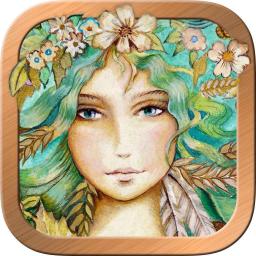 Chrysalis Tarot dives deeply into the waters of our collective unconscious, bringing up pearls of wisdom for our contemplation. Populated by an array of familiar characters from many mythologies, these guardians gently reveal synchronicity’s hand guiding your Tarot spreads, your life, and ultimately, your destiny.

In the world of Chrysalis Tarot, The Empress and The Emperor are Gaia and The Green Man. Medieval and Celtic beings dance elegantly with characters from ancient Greek, Hindu, and Egyptian mythologies, and from Haitian Voudon. These archetypal beings come from all races and from many different times, brought together within the all-embracing diversity of Chrysalis Tarot.

Chrysalis strikes a happy medium between conforming with the venerable RWS system, and re-visioning Tarot for today. Major Arcana cards are re-imagined, and the pips are unlike any you’ve seen before. The court cards are a charming troupe of medieval messengers. But Chrysalis is also similar enough to RWS style decks that it is easy to learn.