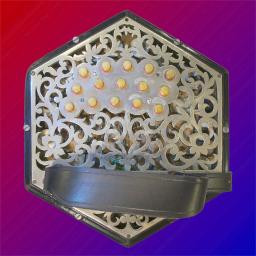 ConcertinaXL is an easy to play, authentic sounding virtual Anglo Concertina in the most popular key of C/G and may be transposed +/- one octave in semitone increments.

It is played using the exact same fingerings as the real instrument.

The layout is based on a common modern variant of the standard Jeffries layout, with three C# notes on the first two buttons of the right side top row.

The Anglo Concertina is commonly used for playing traditional Irish dance tunes, and is a much-favored instrument in County Clare, Ireland.

The instrument is bisonoric, meaning the instrument plays a different note for each button depending on whether you are pushing or pulling on the bellows.

ConcertinaXL is the perfect app for someone interested in the Anglo Concertina to have an experience of playing the instrument and become familiar with the button layout without the expense of purchasing a real concertina.

For experienced players, it can serve as a practice aid when it might be impractical to play the real instrument.

When the app first runs it will ask you to set the tilt center. Place your iPhone or iPad in the position you will be playing it and touch OK.

You may reverse the bellows while pushing a button simply by tipping in the opposite direction.

On the iPad, touch the diamond area at the center bottom of the screen for tremolo effects. The higher up on the diamond, the greater the effect.

Multiple buttons may be pressed at the same time to play chords.

Touch the "?" on the upper left corner to show/hide the button note names. The note names track the push/pull tilt.

Touch the "i" on the upper right corner to show/hide the tilt sensitivity, transposition, and calibration controls.

You may transpose the pitch up or down up to one octave in semitone increments.

For a Bass Baritone concertina, one octave lower than a standard C/G instrument, set the transpose to -12.

When transposed, the note labels do not change, just the pitch produced.

Touch "Calibrate" to reset the home position for tilting.

All settings are saved when the app exits.

The button layout and spacing on the iPad screen exactly matches a real 30-button instrument.

Please visit the app website for more information about playing the Anglo Concertina.