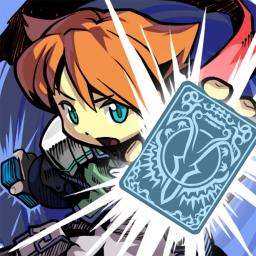 -Game Center compatibility added
-Lowest number of days to clear added to leaderboards
This number can be checked on the Records screen.

-Summary of monster information obtainable at the Guild

Please get information on where to go next at the Guild as usual.

-Cards can now be purchased in bulk

“Whoever controls the cards shall control the world.”

Description:
Weapons and magic are embodied in cards
that you can build into a deck and then use to
defeat monsters in this card battle RPG.

Test different combinations to learn how to master
the cards in your own unique way and save the world!

There was once a mysterious land where weapons,
magic and items were embodied in special cards. Ones who
studied the art of handling these all-powerful cards over long years
were called “card-users,” and the five kings of the land relied on them
to maintain peace and balance.

However, one day, reports of monsters attacking towns and
travelers suddenly spread throughout all the kingdoms.

At that time, a young boy began a journey in Firsta, a land known for its bold adventurers.
What secrets will he uncover in his quest to becoming a master card-user?

-Colorful characters like guild clerks and card shop owners
create a unique world for the tale to unfold in.

-Exciting battle music! Play with the volume up!

-Choose 20 cards to build a deck.
You can have multiple cards of the same type.

-Focus on aggressive attacks, support abilities or any other style.
Try to find your own winning combination.

-Your hit points (HP) differ depending on what deck you use.
It is important to maintain a balance between cards with
powerful techniques and ones that grant a lot of HP.

-A horde of deadly monsters awaits you.
Tailor your deck to the strengths and weaknesses of your foes!

-Buy new cards with reward money for clearing out monsters!
Equip yourself with new, powerful weapons as you fight your
way across the land.

-Different cards are available in different towns.
Can you collect every type of card in your explorations?

-The Guild will always offer new monster-hunting jobs
and tell you where monsters can be found.

-The adventurers that gather at the Guild have plenty of
good information. They may even tell unusual tales that
don’t involve the usual monster talk.