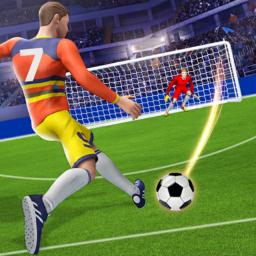 Indoor Soccer Futsal 2021 is the first kind of game on the app store. People’s love for indoor games is always on peak hence we present this game to anticipate this. The gameplay is simulated exactly like indoor football matches. Each team contains 5 players in it including the Goal Keeper. The court is filled with an enthusiastic crowd ready to back up their teams.

This football flick game is here to make you a champion at sports. Keep an eye out for your strategy while playing against experienced futsal players. Take a good strike to beat them at their own game. Improve your skills to score a point and play around like a PRO. Play this best mobile arcade flick football game and get ready to win. This game is addictive & fun. Play a soccer tournament with a flick of your finger and be part of this fun mobile game.

Play against different professional players from around the world and become a football flick superstar. Pick a team of your liking to play and also choose a player of your choice. Win the cup by defeating your rivals in this game. It is the best mobile football training game and it will train you as a PRO sports star. The game provides a realistic environment to give you real-life stadium match vibes. Fun and realistic penalty shots to create an awesome environment. This is an easy-to-play game that will keep you engaged till the end.

- Responsive game controls to get control of your player in-game
-Goals replay option in the game to relive your victory
-Adjust match timings according to your comfort in the game
-Option to shout out on social media when you manage to beat your opponent team in a match
-Two different modes to play in: a quickplay mode, and tournament mode
-Global leaderboard to compare your scores from player around the world
-Elegant winter theme along with the snowy season touches
-Get incentive stars on winning according to the number of goals you scored to defeat opponents
-Realistic sounds and stunning graphics
-Option to select your favorite world superstar’s player
-Free kick flick football simulator to start any time & anywhere
-Soccer free game with simple rules and smooth game
-Realistic graphics and sound effect will enhance the game-play experience
-Realistic touch soccer or flick s football game-play