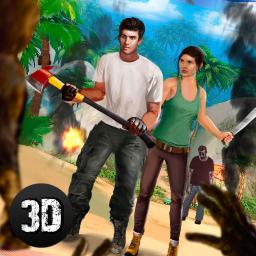 The end is near! Horde of terrifying walking dead broke free from their eternal oblivion and now they are ready to kill everything alive! Become the real protector of the human race and destroy them all with Walking Death Call: Shooter Island!
Keep your weapon alert and remember: these cruel dead monsters brought awful infection with them! Just one bite is enough to contaminate any living being! Be really attentive and careful, unless you’ll have to join their dark army!
They are chasing you through this tropical island, and they will find you everywhere! Don’t try to hide, just load your gun, aim at these dead bodies and make a shot without mercy! Your mission is absolutely clear: stop the zombie plague and become the universal hero killing walking dead in the jungle!
Earn points to unlock new powerful weapons like shotgun, hunting rifle, assault rifle, bow or even sub-machine gun! Level up your shooting skills and become the real zombie hunting champion in Walking Death Call: Shooter Island game!
Mind to check 4 game modes – two base ones and two hardcore! ‘Death tide’ is a real survival mode, where you should defend the barricades as long as you can, and ‘Waiting for help’ mode will give you a chance to survive for a limited amount of time! In hardcore modes your aims are the same, but every walking dead target can be killed only by a headshot!
Walking Death Call: Shooter Island features:
• Horror-like walking dead shooter
• Different types of weapons – unlock them all!
• Two locations
• Four game modes for more fun
• Destruct all zombies with a headshot!
Become the best zombie hunter in the world! Start your own apocalyptic adventure and have fun playing Walking Death Call: Shooter Island game!

Walking Death Call: Shooter Island Full was not featured in iOS in France on 02 Mar 2017.