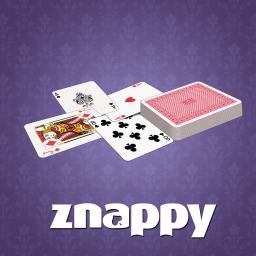 The multiplayer WHIST Game, developed by http://www.znappy.com/ is now available on your iPhone, iPod Touch or iPad!

Known as: Oh, hell! Blob, Boston, Vint, Tarneeb, Spades, Colour whist or Kleurwiezen,
Whist is a very popular game. Is a classic English trick-taking card game which was widely played in the 18th and 19th centuries

Introduction: Playing in 3 , 4, 5 or 6 players . It is an individual game.
Cards : From a normal package extract eight cards for each player (24 for three, 32 for four players, etc) starting with the largest . For three players the lowest card in the game will be 9. 7 will be four for players , and so on . The cards order is standard , A is the highest , then K , Q, J , 10, 9 ...
Dealing the cards: The first dealer is chosen randomly . Then take turns in clockwise each player will be dealer . Betting : Each player , in order, starting with the dealer, bets the numbert of trick he thinks he'll do. The sum of all bets must be different from the number of cards of the round (and therefore sometimes the last bet is seen unable to bet the number desired) .
Actual game : The dealer begins the round, putting down a cards. The goal is to win as many hands as you place at the beginning.
Score: A round ends when all cards have been played from the hand.
Those who bet corect, get 5 points plus the number of hands taken ( you said you two hands and did , win 7 points).
If you bet higher that the trick you won, for eatch trick you bet and didn't won, you loose one point. If a player succeeded to bet correctly and win the tricks, five consecutive games (excluding games 1), he is awarded 10 points. If a player bets wrong five consecutive games (excluding games 1 ), it is negative awarded -10 points.
The player with the most points wins.

Download free WHIST app from Apple Store and enjoy the gift points, playing your favorite game with a new design.
Easy to access, fast and free: the player logs in with username and password or login with Facebook account. Entered in lobby, the player may choose to create a new table or join the existing ones.
Home button exits the application.
Points acquisition is possible using Buy points button in Whist Znappy App.
Caution! In the absence of a wireless connection or data traffic, the application is inaccessible