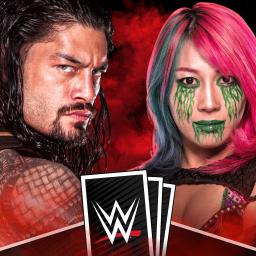 From the creators of NBA 2K, WWE 2K, WWE 2K Battlegrounds, WWE SuperCard is the ultimate collectible card battle game where you build your deck of WWE Superstars and fight to rule the ring. Collect new cards and rewards daily and battle in events like WarGames, Last Man Standing, or Money in the Bank!

Collect cards featuring WWE Legends and Hall of Famers from throughout WWE history. Build your deck and battle other players across a variety of game modes, real-time events, and PVP matches.

Deck building has never been more fun with WWE Legends like The Rock, Undertaker, “Stone Cold” Steve Austin and Hulk Hogan available for you to collect and level up. Build your ultimate WWE dream team featuring new WrestleMania 37 cards such as Sasha Banks, Bianca Belair, Roman Reigns and more!

Battle cards against other players from around the world in PVP matches and other card fighting games with your favorite WWE Superstars. Choose from thousands of cards to leg drop, Rock Bottom, and slam into the virtual mat. Create the ultimate fighting team and crush the competition!

The SuperCard universe expands with each update. Play event types like Clash of Champions. Battle in a five-week SuperPass event and take on quests to earn rewards. Compete in monthly activities and keep up with the latest WWE events to collect cards with SuperStars featured in the latest WWE pay-per-views from Royal Rumble, Survivor Series to SummerSlam. Get collectible cards from the latest weekly shows, like NXT, NXT UK, SmackDown and Monday Night Raw.

CCG and WWE make the ultimate tag team. Hit the mat and join the millions of players across the globe who have downloaded WWE SuperCard -- and jump into its high-octane twist on CCG gameplay.

Card Fighting Games
- WrestleMania meets collectible card games! Build your deck of battle cards and use strategy to try to rule the ring.
- Capture the briefcase in Money in the Bank
- Strategize your way through a King of the Ring tournament against others
- Climb the leaderboard against others in Elimination Chamber and Royal Rumble matches

Build your deck, collect pro WWE battle cards, and step into the ring in WWE SuperCard.

WWE SuperCard is just one of the many titles brought to you by 2K including NBA 2K21, the upcoming WWE 2K22, PGA Tour 2K21, Bioshock, Borderlands, XCOM, Mafia, Civilization, and more!

Do Not Sell My Personal Information: https://www.take2games.com/ccpa

WWE SuperCard - Battle Cards was featured in iOS on 1 placements in France on 19 Aoû 2018.