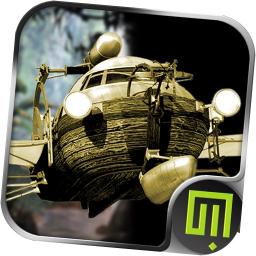 THE ADVENTURE
Before dying, the explorer Emile Valembois tells you about the most amazing expedition of his career. This expedition was dedicated to the crazy "white bird" mystery. He confides to the young journalist that you are, the odd mission of returning to Amzerone in order to bring back an egg that was robbed 50 years earlier…
Legend has it that strange white birds are born and die in mid-flight, without ever landing. To bring this species back to life, you'll travel through enchanting landscapes, from Brittany to tropical forest. You'll have to solve the mystery of these famous white birds...

You are suddenly transformed from journalist to explorer setting out for the Amerzone, chasing down any clues that Alexandre Valembois left you in his lighthouse.

THE GAME
This Point&Click adventure uses 360° vision.
The story has been freely adapted from a Benoît Sokal's comic book adventure, an Inspector Canardo mystery, published by Casterman.

FEATURES & HIGHLIGHTS
• The first adventure from the author of Syberia and Syberia 2, Benoît Sokal
• The fascinating treasure trail laid out in Valembois' notebooks
• High-definition graphics and cinematics
• Numerous enigmas to solve
• The varied and bewitching music and ambient sounds
• Voices and texts are available in 5 languages (English,French,German,Italian,Spanish)