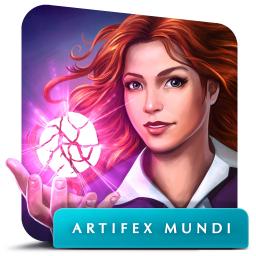 FANTASTIC HIDDEN OBJECT PUZZLE ADVENTURE GAME FROM THE CREATORS OF ENIGMATIS AND GRIM LEGENDS!
Time Mysteries: Inheritance – Remastered is an enhanced version of one of the most important games in Artifex Mundi’s portfolio and the first chapter of an exciting trilogy of time travel games from 2010. Vivien Ambrose, a young doctor of physics, goes to her father’s house to celebrate a recent scientific achievement. When she gets there, she finds out her dad is nowhere to be found.

While looking for clues to her father’s disappearance, our protagonist finds a strange letter, which bestows upon her an unexpected family inheritance: seven magic rings and a crystal ball. These mysterious items will grant her the power to travel through time.

The artefact gives Vivian a glimpse into her father’s fate: for reasons unknown, he has been abducted by a mysterious Time Traveller.

Our heroine goes on a dangerous journey through time and space, determined to find her father. Little does she expect that the journey will reveal an age-old family secret.

Vivien will have to use all of her wits to solve challenging puzzles, uncover dark secrets, collect the magic rings and save her father.

Will Vivien accomplish her goals and defeat the Time Traveller?