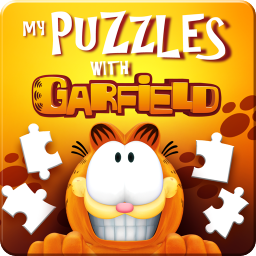 My Puzzles with Garfield

Take part in Garfield's adventures through a series of puzzles and follow in his footsteps, or rather paw prints! Funny, intelligent and way too fond of his naps, Garfield has always attracted generations of fans, adults and children alike. Beneath his gruff exterior lies a little heart of gold! Garfield doesn't stop to think about putting himself in harm's way if it means his saving his buddies. Although maybe the thought of a tempting pizza or a large serving of lasagna at the end of it is what spurs him on, because if there's one thing you can say about this cat, it's that he's always starving!
Rediscover an animal who's so much more than a pet in both the cartoon and comic-strip formats, where there's some major fun to be had!