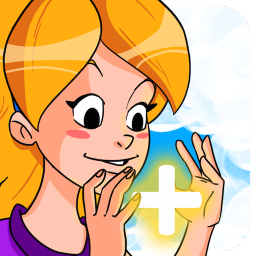 !!! 50% Off Launch Offer !!!
Come and discover the new adventures of Plume and her friends with Plume's School: Learning Addition! The witch has struck again! App users must solve addition problems to avoid her pitfalls.
With 18 levels, this new app in the Plume’s School collection focuses on helping kids learn addition, from simple single-digit sums to more complex ones. The app offers a total of 12 different games, including "Match the Sum and the Result," "Memory Addition," "Bigger or Smaller?" and a quiz on the new information taught in the app.
The first nine levels of the app feature addition problems using numerals 1-9, while the remaining levels explore two-digit problems, both with and without carrying over.
A reward system keeps kids engaged by allowing them to collect stars throughout the app's challenges and redeem them to unlock new cars and characters. In addition, each milestone reached (25 stars gathered, 10 games won, etc.), results in the user earning a corresponding trophy.
Plume's School: Learning Addition allows for several user accounts at once, making it ideal for use in a classroom setting. It also allows the teacher or parent to skip levels or go directly to problems involving carrying over, depending on each user's abilities. The parent/teacher section also allows the adult user to manage each level specifically, with direct access to the games needed to work on specific issues. Progress reporting for each user is under development. The app is available in both English and French, but since it is not text-heavy, it is accessible to all children regardless of language. The app also includes an option to change the font to one that is designed for dyslexic children.
This app is built by a team of professionals and will help your child prepare for success in school while having fun. The app is not intended to be a replacement for the teacher, but it does provide a wonderful complement to the solid foundation provided by school, and is meant to parallel a child's school work. The Plume's School learning program is designed for children ages 6-8, but may also be useful for younger children who are already familiar with the concepts of addition.


This Plume’s School app contains no in-app purchases, no advertising or data collection and no unprotected external links.