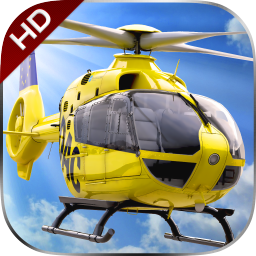 Be prepared to be amazed in this real world simulation! Fly some of the most famous helicopters above New York. We added road traffic, blimps, balloons, cruise ship and a huge aircraft carrier to make it as perfect as we can. We added even the feature to fire missiles from an Apache Army helicopter! Very exciting!
Choose one of the best helipads to depart and land, including rooftops, parking lots, in the aircraft carrier, cruise ship. Fly with 6 helicopters over 60 different missions!
Environment physics also include weather conditions, such as winds and turbulence.
These are the Helicopters included in the game:
- Eurocopter HH-65 Dolphin
- Bell 47
- Bell 206 Jet Ranger
- Bell 407
- Aerospatiale Gazelle SA 341
- Boeing Army Apache AH64 (with missiles included)
Become a rescue pilot, military pilot, private or commercial helicopter pilot! It's up to you!