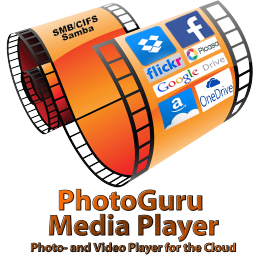 PhotoGuru Media Player - Photo and Video Player for the Cloud

PhotoGuru Media Player is designed to display photos and videos from various file- and photo hosting services on Android-based phones, tablets, smart TVs and set-top boxes. The intuitive and beautiful user interface gives users easy access to the photos and provides an inexpensive way to showcase photos, videos and media presentations in the most professional way possible. PhotoGuru is compatible with Google Android TV devices as well as Amazon’s FireTV media players. 4K/UHD rendering of images is supported on several high-end devices.
The app has been installed >200,000 times from the Google- and Amazon stores and is used in homes, offices and store fronts as well as by promoters during concerts and other events.
PhotoGuru Media Player can access photos and videos from the following cloud-based photo- and file hosting services:
• Dropbox
• Flickr
• Google Drive
• Google Photos
• Local USB Sticks/drives
• Microsoft OneDrive
• SmugMug
• UPnP/DLNA
• Windows Server (Samba, CIFS)
• WebDAV
• Zenfolio
The app supports true 4K/UHD rendering of images on the following devices:
• FireTV 4K (small rectangular box released in 2015)
• FireTV Stick 4K (released in 11/2018)
• NVidia Shield (all versions)
Due to hardware limitations, PhotoGuru does not support 4K rendering on the FireTV 4K dongle that was released in 11/2017.
The app is ad-free and does not cost anything. In order to keep it that way and to remove a trial message within the app, we ask you to purchase the module for the cloud-storage provider that you use for approximately $3.50. Proceeds are used to finance future development of the app and to purchase new equipment for testing.

レビューや評価をチェックして、PhotoGuru Media Player - Photo and Video Player for the Cloudに対するユーザーの気持ちを知りましょう。