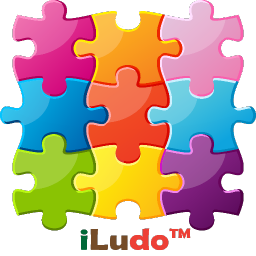 iLudo is a product of Vimalsoft (Pty) Ltd a legal entity registered in South Africa and informally operating in India. iLudo name originates from Latin ludo, "I play". iLudo is a board game for two to four players, in which the players race their four tokens from start to finish according to the dice rolls. Like other cross and circle games, Ludo is derived from the Indian game Pachisi, but simpler. The game and its variants are popular in many countries and under various names. In South Africa it is still referred as Ludo but the rules make it playable exactly like Pachisi. The iLudo is named from the original name but in South Africa, there are those who speak a Zulu language from the townships who refer it as iLudo. Special areas of the Ludo board are typically colored bright yellow, green, red, and blue. Each player is assigned a color and has four tokens of matching the color (originally bone discs but nowadays tokens made of cardboard or plastic). The board is normally square with a cross-shaped game track, with each arm of the cross consisting of three columns of squares usually six squares per column. The middle columns usually have five squares colored, and these represent a player's home column. A sixth colored square not on the home column is a player's starting square. The center of the board is a large finishing square often composed of triangles in the four colors. One (Play against CPU), Two, three, or four may play. At the beginning of the game, each player's tokens are out of play and staged in one of the large corner areas of the board in the player's color (called the player's yard). The players can only introduce their tokens one at time on their respective starting squares, and proceed to race them clockwise around the board along the game track. When reaching the square below his home column, a player continues by racing tokens up the column to the finishing square. The rolls of a cube dice control the swiftness of the tokens, and entry to the finishing square requires a precise roll from the player. The first to bring all their tokens to the finish wins the game. The others often continue play to determine second-, third-, and fourth-place finishers but in the first version of iLudo that will not be available.