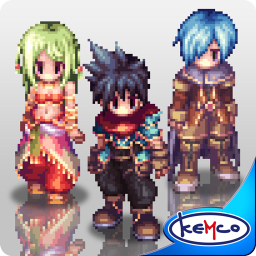 Ultimate old-school adventure lands with the return of the Guardian Beasts!
[!darkness!]
In Illumica, an invasion of the enemy lands of Laft is being planned. As a sign of this, Kline goes into Laft undercover. Kline is an apprentice High Beast Knight (a Rivell), but he is definitely not at the top of the class.
In Laft, Kline sets eyes on a shocking scene.
Blood-soaked battles between enemy tribes, darkness energy widely misused, huge monsters called Vasists...
And a young girl whose life is in danger in the midst of the fighting.
On an impulse, he abandons his mission, and runs to rescue the girl.
This is an age when the Earth-Surface and the Earth-Depths are soaked with blood and stained with hatred. The characters fight against their destinies, and in the course of time, they will face a desperate battle against the split of history and the evil that lurks there.
[!features!]
- 40+ hours of gameplay
- Beautiful SNES-like 8bit dot artworks and animated turn-based battles
- Innovative Command Palette battle system designed for touch screen interfaces
- Contract Guardian Beasts and High Beasts to take advantages in battles
- Partona (bonds) system between allies, Guardian Beasts and High Beasts
- Engage in numbers of subquests
- Obtain new skills with the Magic Meteorites
- Collect materials and craft ultimate weapons
[!while!]
[!this!]