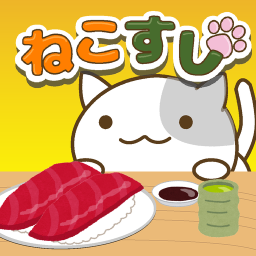 Does a cat sneak into revolving sushi?
A cute cat is sushi selfishly for revolving sushi.
The mini game appearance eaten away!
[!how!]
Every order is OK for the order a tap of an ingredient for sushi of a title does!
When a tap does all 5 titles, the next title comes out.
When I keep doing a tap without making a mistake in a title.
Because remaining time is added.
A tap will make the ingredient for sushi as correct as possible!
That the miso soup which comes out is taken for a ball-, bonus mode!
Because all titles and ingredients for sushi will be tuna.
The chance to recover remaining time!
Every time time has passed for the speed down which an ingredient for sushi floats.
The number of the ingredient for sushi which is becoming early and is flowing gradually.
It's increasing, so degree of difficulty is becoming high one after another.
Use eyesight of a body in motion and concentration and aim at a high score!