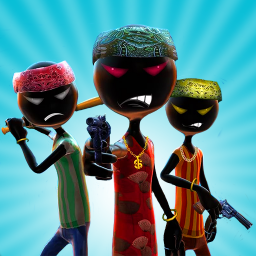 Shadow Gangster War is all about a crime city with stickman gangsters and thugs. It’s a super hero challenge to work on an assignment in a new city undercover without letting other shadow mafia members know about your identity. Look for the gangster murdered of the mafia gang in crime city. Be brave enough to take vigorous action against your stickman rivals. Help Mafia people, thieves and rivals in their criminal activities and stealing to gain their trust. An ultimate stickman action game! Your secret mission involves using different combos of fighting with various weapons, undercover attacks and sneaking inside the territory in a stealth mode. Ruin your enemies’ missions before they even try to shoot you or kill you. This battle is between you and your shadow gangster rivals. Enter the most realistic world of battle and win the war. Fight like a daredevil commando to survive and kill the murderer. The death can’t even stop you from fulfilling your mission. Become bold and courageous city hero. Only you can take the risk as an undercover mafia agent to kill the shadow gangster murderer as a combat hero. Enjoy this fun addictive game like a true fighter, legend & mafia underworld boss! Play Shadow Gangster War for an extreme crime city simulator action adventure. Storyline of Shadow Gangster War is about a man, Michael, who used to be a very rich person & a famous businessman. But unfortunately his wife got kidnapped & murdered by an underground shadow gangster mafia group who were after his money & business for a very long time. To take the revenge from the stickman gangster leader, Michael leaves his luxurious life, money & past behind to join that stickman gangster group anonymously. In order to gain their trust, he starts doing the dirty work for them such as smuggling the drugs, taking over the rival group areas & fighting the other mobs. Once he earns their trust, he comes face to face with the man who murdered his wife. His mission involves all the criminal activities to find the killer and assassinate him. The crime city is too big to look for the stickman gangster lord. You need to help Michael join the shadow mafia group to get the insight. Play the role of Michael in Shadow Gangster War to fight the battle for the right. An ultimate crime game with sneaking, stealing, police chase, criminal escape, killing and mafia war.