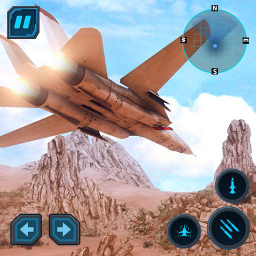 Army Convoy Air Combat Mission is an ultimate sky war against the enemy airplanes and sky fighters. Use all your skill as a pilot to take out both land and air targets to complete each mission. Take control of your air force fighter jet and fly high into the skies. Fight the air battle in the skies against some of the best airplanes. It is flight simulator mission game to test your flying skills. Your airbase - Aircraft Carrier is under the enemy air force attack and the freedom of your airbase is in danger. Play the air strike battle simulation and defend your country’s pride in this jet fighter flight simulator. Show your sovereignty as a pro fighter jet pilot to battle the sky war. Destroy enemy navy, lethal weapons and carrier ships to combat against their air force strike. Become a pro jet flight driver and fly high in this air force flight simulator. Defend your base against air and navy attacks. Complete the series of air missions and save your country’s pride. Get the taste of flying the most deadliest war machines like F-16, F-18 & MIG 29. Fly high in the skies like a pro air force fighter jet pilot. Disengage your jet from enemy SAM missiles, avoid radars, select your favorite weapons and destroy warships, shoot Gunship aircrafts. Get ready for an ultimate air attack!