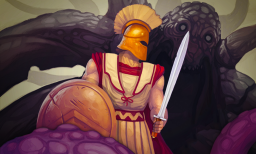 The acclaimed indie game The Curse of Issyos is finally available for iOS and tvOS devices, after years of popular demand. Enjoy this renowned game created by Locomalito, author of other gems such as Cursed Castilla and Super Hydorah, on your big or small screen.

► LevelUp - “A great reconstruction of the action-platform genre of the eighties”.
► Indie Games Plus - “The Curse of Issyos is yet another fantastic example of the man’s love for old games and the care he puts into his work”.
► Destructoid - “It's a hard game, but it feels very fair. It's all about watching and learning, and then skillfully pulling off attacks at the right moment”.

Defkalion was fishing at the quiet blue sea when he heard the voice of the Goddess Athena. “Hurry up”, she said. “The isle of Issyos has been cursed by the Olympus!”
And so, fearing for his daughter Delia, his only family left, the fisherman sails back to his home, where the adventure is about to begin.

The Curse of Issyos is a retro-styled action platformer with nothing but the classics of an old 8-bit game: a good bunch of enemies and bosses, linear and open scroll levels, secrets to discover, and a background story inspired by Greek mythology. It doesn't try to mimic a retro system in particular, but it's coherent with its own limitations in the use of colors, sprites and chip sounds.

Features:
● Compatible with MFi, XBox One and PS4 controllers.
● Haptic vibration.
● iCloud support.
● Game Center achievements and leaderboards.
● Play in landscape or portrait orientation.
● Look and feel of a console game from 1987-1988.
● Based on Greek Mythology.
● 30+ soundtrack by Gryzor87.
● 7 levels, 9 bosses and more than 40 unique enemies.
● A secret level that can change the curse of the game.

* Game texts in English only.