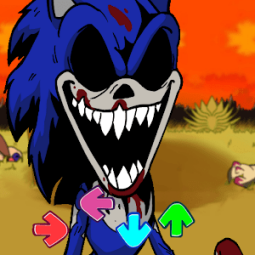 Sonik is one of the new mods in Friday Night Funkin 'game. In the game FNF Sonik.EXE Mod Test you have to control this very hero. This character looks like we used to see him in cartoons, only with minor differences. The main difference lies in his eyes - they have become completely black with small yellow pupils. And the hero himself became very evil and looked crazy.

What should you do in the FNF Sonik.EXE Mod Test game? You need, together with the main character, to score the highest number of points by clicking on the arrows on the screen of your device! Before starting the game, select the track that you like best and the state of the hero, and then click Play. After that, in FNF Sonik.EXE Test Character, the main character and four arrows will appear on the screen, with which you will control the character. As soon as you press the arrow, Sonik will sing a specific note and perform a specific movement. You can turn off the background music if you only want to hear the voice of the hero. To do this, you need to press the beep-shaped button on the screen of your device.

When you click on the arrows, you will be awarded points. After the end of the time, you will see the number of points that you managed to score in the game FNF Sonik.EXE Mod Test. A score of 600 or more is considered a good score. Do not be discouraged if the first time you did not manage to score that many points. Try again! If you managed to score more than 1000 points - you are a great player! You can also arrange competitions with your friends. To do this, send the game to your friends and find out which of you can score the most points in the game. Share your scores and impressions in the comments. We hope you have fun playing FNF Sonik.EXE Mod Test.