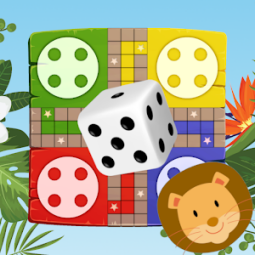 The offline version of the famous ludo game in which you race your pieces from start to finish according to the rolls of a die. It has been popular across many countries with different names from Pachisi in India to Parqués in Colombia. Though rules may differ slightly in different versions, here are the rules of this game:
- There is only 1 die.
- To locate a piece to the first square, you need to roll 6.
- After rolling 6, you get to roll again.
- If your piece arrives at the same square as the opponent's one, you capture it and you roll again.
- If you stack more than one piece at the same square, your opponents cannot capture those.
- Cells marked with stars are safe, no one can capture anyone.


Features:
- Play with friends on the same device or play against computer.
- Both number of players and number of pieces are configurable.
- You can select your animal with the coins you earned in the store.
- Game is saved. You can continue to play where you left off after quitting the game.
- Global leaderboard.
- Fast forward option.
- Uniformly distributed die rolls.