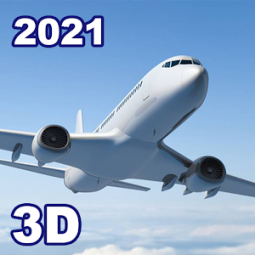 Plane Simulator lets you explore the world of flying in a quality never seen before. The game features massive highly detailed planes with ultra realistic physics. In Flight Pilot Simulator 3D Free, your duty includes racing against time, control a fire in the middle of the mountains, and land safely on a tiny airstrip. You can enjoy it in the subway, or while traveling on a real plane, or in the car on the road, or during services in a temple. There are hundreds of licenses available to improve your skills. Learn how to use all airplanes controls, and to cope with faults, emergencies and unfavorable weather conditions. Control your aircraft through endless environments that includes cities, mountains, lakes, oceans and farms, or complete one of many missions available.

This game of extreme flight Pilot simulator 3d will take your flying training of aviation from pre & post flight orientation to aircraft taxi, normal take off, safe landing and post flight securing of planes in Air Fair 2021. This airplane game will keep you amazed by challenging aerobatic maneuver obstacles like no other plane games in Air Fair 2021. This is a competition to get a title of the world's number one flight pilot in real airplane game control pilot 3d. After sequence of easy tasks of flying aeroplane simulation, lately, airplane crash rescue missions and emergency landing game simulation won't be that easy.

Realistic airplane cockpit environment. All of the necessary controls to make the gaming experience more realistic. This an free planes simulator game on google play store.Control your aircraft through endless environments that includes cities, mountains, lakes, oceans and farms, or complete one of many missions available.