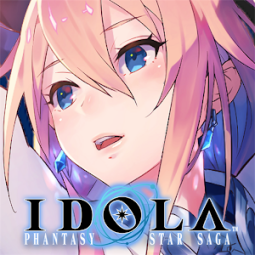 Idola will be releasing in Europe on Octorbor 22nd!

The classic RPG series, Phantasy Star finally comes to mobile! Experience thrilling turn-based battles with two party modes, world-class artwork, an unforgettable musical score, and an epic fantasy through a fully-voiced story campaign. Save the land of Vandor from the threat of Dark Falz.

TWO PARTY MODES
You can deploy and switch between two party modes, Law and Chaos during battles. Switching parties unleashes an all-out attack called Reverse Rush, so take your chances and change the tides of battle!

FATE DIVERGENCE
Face each characters’ fate, and choose the ultimate upgrade for each, changing the conclusion to a character’s story! Not only will it change the characters’ appearance, but also their skills and Elemental Blast as well.

IDOLA BATTLES
Join forces with friends and other players to defeat the IDOLA. You can also become an amazing IDOLA yourself and battle other adventurers! There are various kinds of IDOLA available within the game.

PVP ARENA
Two teams enter – only one leaves. Battle with other adventurers’ teams to become the ACE of the Arena!

PLEASE NOTE:
- This game is free to play.
- Items are available for purchase within the game.
- A network connection is required to play.

The story is pretty interesting. The menu is very simplified so it doesn't have so much that it can feel confusing to use. The gacha here is pretty good compared to other games. I also had a problem recently and support didn't take long to reply and help fix the problem. So they're very reliable and ready to help. I only wish they at least had a character gallery with previous character designs from before doing destiny divergence. Other than that love the game & highly recommend it. It's fun!

Your log in screen is a buggy mess. Cant even pass the TOS screen. Pls fix this and ill fix the review.

Can't even get onto the game, at the terms and service agreement thing, can't even scroll and aceept anything