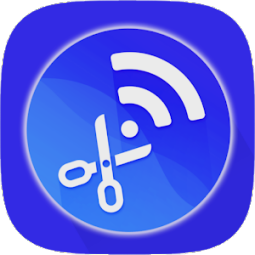 NetCut Free WiFi Analyzer is best wifi network controller application. It can disable (shutdown) the internet connection of other devices connected to the same wifi network. It is a very usefull tool for wifi internet users using which you can cut (Turn off) other people off form a common wifi network and allocate all the bandwidth to yourself. The app is for Android only and it requires root access.

NB: For Upgrade user, please reboot your phone after upgrade. or click Exit in new version and restart. best way is to clean uninstall old version, reboot, and then install new version.

We all have and use WiFi in our homes on a daily basis, but we are not protecting our WiFi properly, in fact, very few have knowledge of whom they are sharing their network with. Using the simplest apps, anyone can get your WiFi password in a matter of seconds, which can tremendously slow down your internet speed or even worse, it can allow others to get to your files and data.

What you can do with Android Netcut?
1- You can quickly detect all network user in WIFI, even when your phone has no valid IP address or not been granted use wifi internet. as long as you connected to any WIFI, netcut can work.
2- Set on/off line to any network users, including phone/xbox,softphone, PS3, PS4 etc.
3- You can cut off network between two network users within LAN , by set one of the user as "gateways" , then cut off the other users, then those two users won't beable to talk to each other, eg: apple TV, Google TV, xiaomi box , cut off the phone connection to those box, will disable screen cast like feature.
4- Netcut Defender built in. (turn on and off in one click)
5- Scan network when you feel there are users still on network and you can't see it.
6- Check phone type, netcut will be able list type of phones.
7- Give user easy to remember name. Long press any network user, a pop up window will allow you input name for the user.
8- Detect attacker, if any one try to play arp spoof to you, you will be able to see it from netcut directly.
9- Scans All Devices In a Second
10- One-Click Quick Scan or Re-Scan
11- Gives You IP And MAC ID Of All Who's Connected to Your WiFi
12- One Screen Lite App To Reduce App Footprint
13- Vendor Address Database To Find Which Vendor's Device is Connected
Who Is in My WiFi, as the name suggests, allows you to see all the devices that are using your private network at the moment and make you in full control over your WiFi. Who is in my Wifi recognizes the IP address, mac address and many more about the your friends that are on your WiFi, and enables you to identify hackers and spies.
Who Is in my WiFi gives you the choice to choose whom you want to share your network with, as well as the option to ban anyone from using it by banning (netcut - selfishnet) their mac address and prevent them from connecting to your network in the future in an easy, fast and simple way.
When NetCut Free is running and your mobile is connected to a public wifi network, this app will make other devices in the same network think that your device is a router. So they will try to connect to the internet through you.NetCut then drops the connections of these other devices easily.