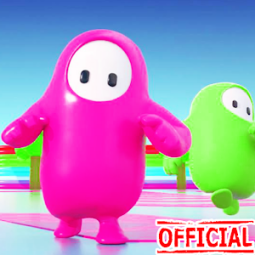 fall guys multiplayer: Ultimate Knockout flings hordes is the Most Pure and Innocent Fun You will have had in a game in a very Long Time. You want a laugh? you wanna rage? You wanna discover something new and refreshing in gaming that takes you away from the mindless grind of other games and give yourself a hard reset on perspective, drink o coffee or grab a drink, grab some snacks and look no further. Strange obstacles, lack of discipline of competitors and inflexible laws of physics stand in the way of success in this modern city center.

in Fall Guys online: Ultimate Knockout flings hordes You have more surprises and levels to come this game has the potential to be one you will be coming back to for a fun time guaranteed always, discover and be part of something special today.
Fall Guys online : Ultimate Knockout flings hordes is a massively multiplayer party game with more than 60 players online in a free-for-all struggle through map after map and round after round.

Leave your dignity at the door and prepare for hilarious failure in your quest to claim the crown!
Fall guys game there are many useful hidden secrets, other games to break all fall guys ultimate knockout stages and missions of the game to you use it according to your advantage
the new fall guys game contains complete tutorial, FYI, tips and tricks on how to play .