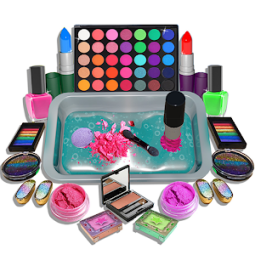 The Slime trend is still rocking the new year 2019 with some more squishy & fun to do things including slime making using new and new things such as making slime without borax, making slime without glue or with glue. So we also bring this new game that makes DIY slime with makeup, can you believe that? Mixing makeup into slime, and yeah that will not let you mixing random things into slime but will also trigger the ASMR sensation in you. Try not to get satisfied with this new makeup slime maker experience that will prove to be oddly satisfying for you and give you chills. The bonus also includes making the new trendy iceberg slime that is covered with iceberg layer that you will love breaking before performing other fun to do squishing, stretching, poking, smashing and pressing slime.

Learn how to make clear slime first then enjoy adding too much ingredients into slime including mixing eye shadow into clear slime by scratching it up with a pointed needle like object that will relax and melt your brain. For more fun you can also make lipstick slime by mixing lipstick into slime. Why don’t I enjoy mixing all my makeup into slime without damaging my real makeup with this super makeup slime simulator experience. The biggest makeup slime compilation is here in this new makeup slime maker game for girls and boys who cant stop obsessing with slimes even in 2019. Also enjoy funny makeup slime fails and play with this squishy, oozy and stretchy toy in your mobile device like never before and try not to get satisfied! Enjoy so many colors of slime including unicorn slime, rainbow slime, iceberg slime & fluffy cloud slime now in this real DIY slime simulator experience. Smash DIY slime & Mesh it with potato masher to see the fun! Pull the screen to see super realistic slime simulations.