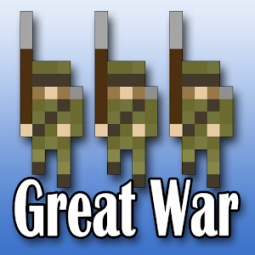 Pixel Soldiers: The Great War is a simple to play, but difficult to master turn based strategy game set during the First World War. You will choose to command the armies of either the Entente (France, Britain and Russia) or the Central Powers (Germany, Austria and the Ottoman Empire).

You will fight from 1914 to 1918 on the Western Front and Eastern Front. You will land on the beaches at Gallipoli, desperately hold or seize the important city of Verdun and try to achieve a breakthrough on the Somme.


FEATURES:
*Command your armies with ease.

*Play against an intelligent AI opponent or another player on the same device.

*Morale system: Units that take casualties may go into disorder or break and run depending on their morale.

*Many different nations, types of units and weapons, complete with individual uniforms.

*Force the enemy from a position with a bayonet charge


STRATEGY AND TACTICS:
Use the terrain to your advantage: Keep vulnerable units behind ridges or hide them in the trees. Protect vital mountain passes, river crossings, towns and forts.

Will you push your troops forward and seize the initiative? Or will you set up a defensive line, await reinforcements and let the enemy come to you?

These and many more questions you will need to ask yourself. There are many ways to win the game.


HOW TO PLAY
Tap to select a unit. Tap again to move or attack!

Pinch zoom in and out of the battle to get a better view.

These are the basic controls to get you started. There is also a tutorial that can be accessed at any time.


I want this game to be as good and as fun as it possibly can be so if you have any questions or ideas let me know! Email me at jollypixelgames@gmail.com