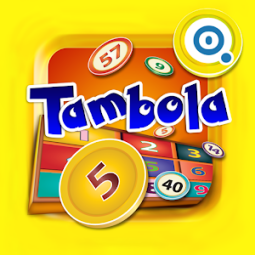 Octro Tambola Game is the most played online multiplayer numbers Game & is also widely known as Bingo 90, Indian Housie, or Indian Bingo. It's a fun, multiplayer game to play with family & friends anytime, anywhere for free. All you have to do is know the basic rules & you’re good to play Tombola Numbers Game Online.

Tambola (Indian Housie or Indian Bingo) is a number calling game where the random numbers from 1 to 90 are called by the in-app caller/dealer and the players need to strike the called numbers off their tickets.

Online Tambola Housie, Bingo 90 Game is a multiplayer game and can be played with 1, 2, or 3 tmbola tickets.

The 1st person to strike off any winning combination wins. Bingo 90 Tambola Housie ends when all the small wins & Full House are successfully claimed.

Octro Tambola is played online with virtual money. A new player is a Level 1 player & gets 10,000 chips & 5,000 gems. For a level 1 player, each ticket costs 100 chips. The winning amount for each winning combination is based on the number of tambola tickets sold.

Unlike any other Tambola Housie Ticket Game, we give everyone a chance to win. In games with a large number of players, there can be multiple claims made on a single Winning Combination. For example, if someone claims a top line, you can also claim for top line.

Octro Tambola Game has different types of tables that you can join depending upon your mood.

Public Table
This is the default game mode. A player here is matched with random players who are also playing on Public Tables. To join a public table, simply click on the “Play” button in the main menu and select the number of tickets you want to play with.

Tambola Party
Players can create their own private party and invite friends to join. Launch Tambola and select Party. Create and have fun partying with Indian Housie Ticket game.

Event
Be on the lookout for Tambola events. These are special game modes that last for a limited time and usually offer huge rewards.

Sponsored Events
These events are free to enter and reward the winners with real gifts like a phone, a bike etc. Be on a lookout for these Tambola events.

Special Voice Chat Feature
Players on the party table can enjoy the voice chat feature & talk to the other players. Doubles the fun, right?

What are you waiting for? Download Octro Tambola Bingo 90, World’s most played Indian Housie game, NOW!