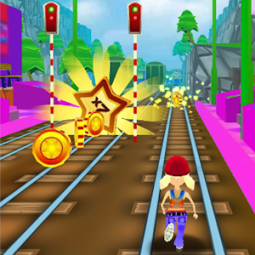 *** When you are pursued by a security guard / ranger, you must run and stay away from the security guard, when you run, you will find many challenges that can make you fail to succeed in playing the Subway Turbo Surf - Bus Rush Run.
*** In the game there will be many useful items for you, such as: rocket to fly, skateboard, jumping boots, and others.
*** When you run, you must collect gold coins, the coin is useful to buy characters and items in the Subway Turbo Surf - Bus Rush Run.