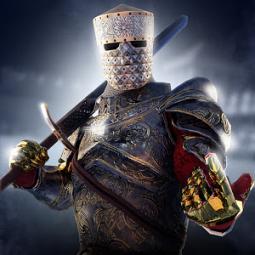 With the edge of its sword blades, your knight will rule the fighting games. In the age of chivalry, of the war of roses, and the reign of the castles, swords and blades, the duel knight reigns. As an aspiring hero, prove yourself in hectic medieval fights - for honor and glory, be the best knight in the sword fighting games.

Fight against knights & heroes who will brutally test your sword skill. Block attacks with the right timing, attack from where the opponent is open, and know when to play hero with your sword and when to hold your blade, strategy is paramount in knight fighting games & 1v1 multiplayer games.

Parry, counter, evade or even throw them off with a kick: every knights fight skill is useful to take the advantage during the 1v1 duel in the sword games, and be the one to take the initiative. But watch that stamina gauge, lest you let yourself get tired and present an easy opening - mistakes will be harshly punished by your rivals, their blades and their dark souls, become the champion of sword games requires of you to move & attack with your sword, axe or mace.

Create your own sword and blades arsenal of weapons for our fighting games and enter the 1v1 battle games, mount your blades on the wall: swords, axes, maces - all wielded differently (HEMA fans: half-swording and mordhau not included… yet). Assemble the perfect armor to give you impenetrable defense on the 1v1 fight battles, complete with the paired helmet and shield - each with unique aesthetics to rule the 1v1 fighting games.

Each piece of equipment has its own stats and unique bonuses: breaking through defenses, poisoning, added damage… In these unforgiving pvp fight & battle games, any small advantage can give you the edge. As a knight on a quest for honor & knighthood, you will have no one by your side: only your sword against the 1v1 fighting games, there is no warrior in Earth, Hell or Valheim that can stand 1v1 in your way.

Experience a solo fighting campaign for knighthood as you sword fight pvp fight against ruthless opponents, lords and kings, with their dark souls, harsh battles and gorgeous arenas: from castle sieges to melee pits, to charred battlefields and arid deserts, only the brave and the hardy will raise their blade and deliver the final slash on a complex political kingdom story alongside the sword games.

Instant duel and seasons, fight and go directly into the sword games, fight against knights and defeat their dark souls, for honor and glory, as you climb the ladder to obtain the fighting title and get the best loot. Thrust yourself into unforgiving medieval games warfare: get in the knight fight and find the opening to unleash an array of powerful blade chains of attack using special fight techniques (still no mordhau).

Show everyone in the sword games that you deserve knighthood, using your medieval games hero skills with the sword, but keep in mind - The rivals won't fight for honor, their dark souls will make them use their blade against you at the slightest chance during the knight games.

And never forget: don’t try to show off on the 1v1 battle games, we let that to those horse mount and blade paladins who joust in fighting games. Down here in the arena of the knight fighting games, where the dark souls of enemy knights threaten to drag you to hell, skills will be the difference between the fight for honor the glory, and death during the sword fighting games.