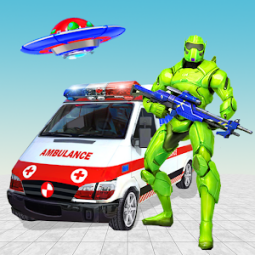 Ambulance robot rescue game is a lifeguard robot rescue animal game in which you have to save the lives of human beings and pets in the city. In this robot transform game, your driver duty is to reach within time at any fire burning case, or any other casualty accident point. Transform ambulance into a flying robot and go to the situation places to pick up the injured man and transport them to the emergency hospital. While driving fast, do not drive rashly and look out for sharp turns, hurdles and city traffic.

Various challenging ambulance driving levels are added in this rescue ambulance simulator to make it one of the best 3D ambulance transforming robotics game. You need to provide the best medical treatment to the injured animals and citizens! Save the civilian's life as much as you can and do their job best.

Ambulance Robot City Rescue Game Missions:
- Fly robot and rescue the injured dog
- Rescue the cat from a burning building with a flying robot
- Robert got hit by a bull, take him to the emergency hospital
- The car got crashed due to wooden logs, rescue the driver
- The plane is crashed save the pilot's life
- A bike rider hit by a car, go there and save the boy
- Handle the car accident at the petrol station
- The truck hit's the car, go there to rescue the driver