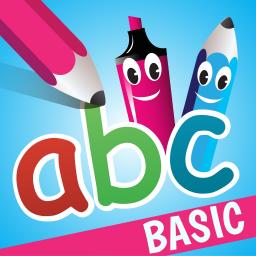 “PocketPhonics teaches the basics of reading and writing to young kids. Most surprising? It seems to work.” 148apps.com

PocketPhonics teaches kids letter sounds, first words and handwriting. It is used in hundreds of elementary schools and pre-schools, and tens of thousands of homes. It is aligned with the Common Core State Standards, and independent research (see appsinmypocket.com/research) found children learnt nine times faster using PocketPhonics compared to a classroom lesson.

The phonics levels are included in the price of this "basic edition", but the storybooks cost extra. PocketPhonics Stories (full edition) includes the stories in the price.

Phonics (letter sounds) help children to read by understanding the sounds that letters make. The National Reading Panel concluded that “children who have phonics instruction read better and spell better than other children”.

Parents and teachers can easily monitor children’s progress online. Teachers and parents are emailed a certificate when a child completes a task.

Children can tap an unfamiliar word in a story, and the app will sound out the letters to help the child understand what the word says. They can tap again to hear the actual word and see a picture that illustrates its meaning.

As the child reads a story, the app tests whether they can read some of the key words. At the end of the story, it quizzes the child on all new words in that story.

writing letters
recognising 72 letter sounds (e.g. ‘ch’ are the letters that make the initial sound in ‘chat’)
* blending letter sounds together to make words (e.g ‘ch-a-t’)
* hearing a word and selecting its written form (e.g. the app says, “chat”, the child has to select ‘chat’ from a group of words)

How it works
* The phonics levels are included in the price.
* The books are extra, but can be tried for free. $1.49 monthly and $14.49 annual subscriptions unlock access to all books for an unlimited number of children
* The subscription gives you access to more books as they are added
* Once subscribed, your subscription auto-renews each month or annually. However, you can easily turn auto renew off via the Settings app
* Payment will be charged to your iTunes account at confirmation of purchase
* Subscription automatically renews unless auto-renew is turned off at least 24-hours before the end of the current period
* Cannot cancel current subscription during its subscription period