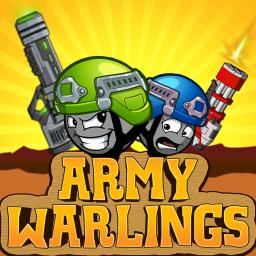 Game Army Warlings is a very interesting game. Players will be role-playing as soldiers to fight on the battlefield.
We give you six battlefields, a bunch of weapons and a crack team of Army Warlings to execute your combat maneuvers. Locations include combat in space, at sea, in the air and much more!
You can play with the system alone and play with friends - hot-seat modes available.
Play Army Warlings engage in battle with a team to defeat the enemy with the weapon, tactics and dirty tricks with fully destructible terrain. Defeat other players online and reach the rank. You can play with friends too.
Army Warlings is completely free to play but some optional in-game items will require payment
Army Warling's features:
• Fully destructible terrain
• 20 awesome weapons
• 8 quality maps
• Customizable troops
• Anytime, anywhere, you can still play Army Warlings without internet access
• Hot-seat mode
Get some action. To Army Warlings. Let's start.
Like the official Facebook page of LightningStudio at Page https://fb.com/lightningstudiogames!
Have fun playing Army Warlings!

Army warlings was featured in iOS Store on 1 placements in 日本 on 2017年1月4日.