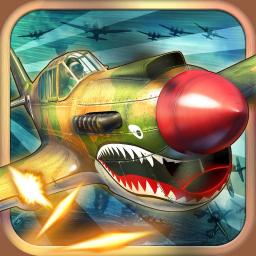 iFighter2 brings you back to the Pacific War in World War II to challenge the Empire of Japan with their powerful fighter jets and aircraft carriers.

iFighter2 is by far the most realistic vertical shooting game on iOS and a masterpiece remake of the classic arcade experience!

- 10 World War II fighters with 8 different characteristics of wingmen. Different combinations will give the player different attacking tactics!
- 3 difficulties, each with 7 challenging missions
- Survival mode
- Achievements
- HD graphics with gorgeous visual effects, bringing the most realistic gaming experience to the players.
- Armory Store to buy superior fighters (some with auxiliary weapons), powerful sidekicks (with tracking missiles etc...), super bullets, invincible shell, and auto-refill and so on.