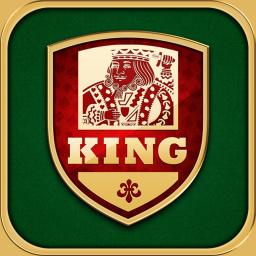 King is a trick-taking card game played by four players. The game is popular in many countries and is similar to the Barbu (Tafferan) game. It uses a standard 52-card pack, ranking from highest to lowest A K Q J 10 9 8 7 6 5 4 3 2 in each of the four suits.
In the course of a session, each player will play two trump and three negative contracts, so that there are 20 hands played in all.

There are six negative contracts:
No Tricks, No Hearts, No Boys, No Girls, No King of Hearts, No Last Two.
Taking cards/tricks gives a penalty points.