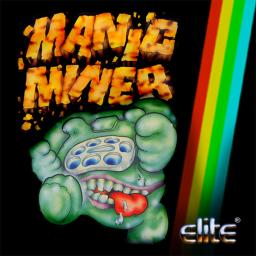 Search the App Store for “the Manic Miner® app”.

IMPORTANT: To 'Save' the game go 'Back' to the Main Menu before quitting the App.

Manic Miner for the ZX Spectrum (an 8-bit personal home computer released in the UK in 1982 by Sinclair Research Ltd, which sold in excess of 5 million units worldwide) is one of THE defining games of the 1980s.

Manic Miner: ZX Spectrum is also available in this stand-alone form but does not include any other ZX Spectrum games.

Manic Miner: ZX Spectrum is the 100% original ZX Spectrum game, written in 1983 and is brought to you - as an officially licenced product - utilizing our ZX Spectrum: Elite Collection technology.
Featuring:

Manic Miner is a platform game originally written for the ZX Spectrum and released by Bug-Byte in 1983 (later re-released by Software Projects). It is the first game in the Miner Willy series and among the pioneers of the platform game genre. The game itself was inspired by the Atari 800 game Miner 2049er. It has since been ported to numerous home computers and video game consoles. At the time, its stand-out features included in-game music and sound effects, excellent playability, and colourful graphics, which were well designed for the graphical limitations of the ZX Spectrum. On the Spectrum this was the first game with in-game music, the playing of which required constant CPU attention and was thought impossible. It was cleverly achieved by constantly alternating CPU time between the music and the game (which accounts for the music's stuttery rhythm). The in-game music is In the Hall of the Mountain King from Edvard Grieg's music to Henrik Ibsen's play Peer Gynt. The music that plays during the title screen is an arrangement of An der schönen blauen Donau (popularly known as The Blue Danube), a waltz by Johann Strauß.

Manic Miner for the ZX Spectrum contains the following 20 rooms:

In each of the twenty caverns are several flashing objects, which the player must collect before Willy's oxygen supply runs out. Once the player has collected the objects in one cavern, they must then go to the now-flashing portal, which will take them to the next cavern. The player must avoid enemies (listed in the cassette inlay) as Poisonous Pansies, Spiders, Slime, and Manic Mining Robots, which move backwards and forwards along a predefined length at constant speeds. Willy can also be killed by falling too far, so players must time the precision of jumps and other movements to prevent such falls or collisions with the enemies. The game ends when the player has no lives left; extra lives are gained every 10000 points.

About Elite®: Elite Systems Ltd was incorporated in England in 1984.