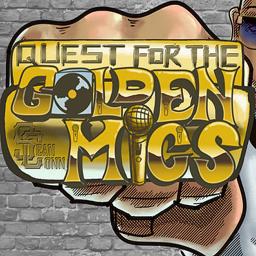 Quest for the Golden Mics

The Quest for the Golden Mics is an old school arcade style beat-em up mobile game . Starring the world-famous rapper Sean Conn, Guide him through the world of Hiphopia saving the City from Shady Executives, Corrupted Club Owners and Mumble Rappers while searching for the legendary Golden Microphones to restore peace and music back into the city.

Use the Virtual Turn Table Controller (Sean00MIX) to control Sean Conn by:
- hold down the record to walk foward
- swipe left and right to turn directions
- swipe up to jump
- hold down and swipe up while moving forward to jump forward
- tap the record to quickly attack (works in the air too!)
- Use the left buttons to pause game and control speed of the game
- Use the sliders and arcade button to unleash super moves when your gold bar is full

- Choose between an engertic hiphop or arcade chiptune soundtrack!

Our goal is to produce a high quality, action pack arcade style game optimized for mobile devices, to sell in the market aimed at adults, teenagers, older children and hardcore gamers who are in demand for a fun classic style game. At the same time exposure is made for Sean Conn's already famous music, and other members who are in the project and most importantly sponsors who can advertise with us.

One handed easy to use joystick style controls from the SC00-MIX
Able to Run, Jump, Punch, Kick and Perform special moves with Sean Conn
Able to Slow down and Pause Time!
Control Sean Conn's special powers with the Sean Conn 00Mix Sliders and button
Switch to a slower tempo for easier gaming with the 33/45 BPM buttons