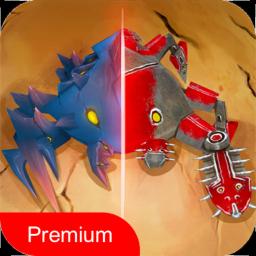 Under the scorching sun a new civilization found its origin. Spore Monsters survived on this deadly empty ground and evolved.
Organics is too weak for this sizzling and exterminating area. The solution was found in symbiosis with the technologies of extinct humanity. Technological transformation of monsters’ claws, limbs and bodies happened. These transformations of monster species allowed to adapt to the unfriendly environment. But this rapid evolution badly affected the minds of creatures, causing rampage, madness and rage. Now these creatures are even more insatiable, fierce and hungry.

Found in the deep ocean abysses, spore monsters were genetically modified by scientists in cell labs and now they survived their creators. They are much stronger, angrier and more flexible monsters then there were. But they continue evolving turning into high tech monsters.
Take part in a fierce clash for the territory, becoming one of the terrible monsters. Destroy your enemies, absorb their genetic code (DNA) and evolve in order to dominate monsters who dare to challenge you. Become a monstercrafter and decide by yourself how your new monster will look like. Feed and grow your own fighting monster. Don’t make monsters starve!

Enjoy unlimited evolution and transformation but take care!
Many more furious creatures set their heart on this territory. Giant sand worms who are ready to absorb and devour anyone who dare to come close enough to its abyssal jaw. Gigantic crab who does not take part in this war, but who constantly observe the fight of its smaller genetically similar species.

Start as a tiny nasty wood louse looking creature that can hardly survive several seconds in this unsafe environment. Run away if you see another moving objects like monsters, deadly spiky balls, worm holes, devour DNA of other wild monsters and just collect DNA scattered over the territory. The only way how you can survive is to constantly evolve, acquire new skins, improve parameters of the insect and constantly change the tactic against other insatiable monsters.

Depending on the monster’s evolution stage it can become a tiny weak but very fast monster or, in contrast become a furious, mighty and dangerous monster easily devouring other inhabitants of this tiny universe, showing its power in clashes. It is completely your decision on which skins and parameters to spend the DNA collected in the battles and which evolution path to choose.

Spore Monsters.io 3D Premium was featured in iOS Store on 2 placements in 日本 on 2018年8月19日.